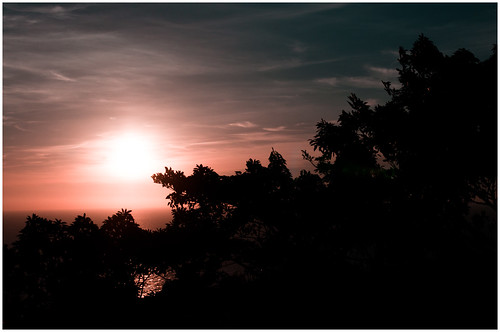 During our family trip south this summer we drove to Guanshan [關山] in Kenting National Park to catch the sunset. Guanshan is a 150 meter tall mountain and last year was mentioned on a list compiled by CNN as one of thirteen superb sunset spots. Here’s a trio of photos from our visit. 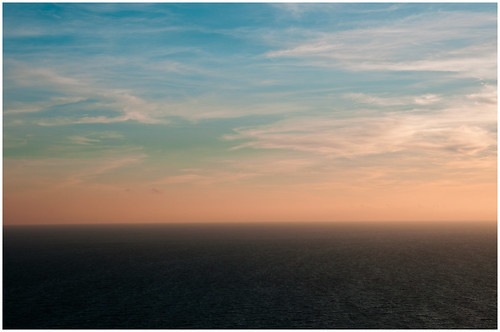 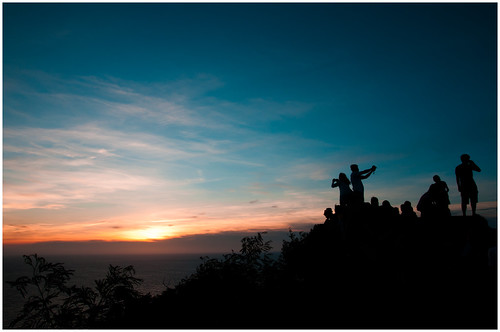 Here are a handful of pictures from Pingtung’s Long Chuan Brewery [龍泉觀光啤酒廠]. I visited the brewery during a company trip last year. The tour began with visitors being corralled into a small theater to watch a video introduction of the brewery. After the video, guests were pointed down a few long hallways and rooms. Some visitors have the opportunity to view the bottling machines in operation at the plant. All the machines were off when we went as the local demand for Long Chuan and Tsingtao Beer doesn’t necessitate having the plant run on Saturdays. Instead, we got to see a small LCD screen featuring a looping video of what happens on the floor of the bottling plant. The end of the tour brought us to an area selling refreshments, souvenirs and giving away plastic cups of beer.
END_OF_DOCUMENT_TOKEN_TO_BE_REPLACED

Keeping an Eye on You

It’s often mandatory during company trips to stop at various locations either to or from the destination to shop for local specialties.  After an employee outing to Kenting we were dropped off in Donggang [東港] in Pingtung County to go seafood shopping.  I’m not much of a seafood fan so I didn’t walk away with any fresh seafood.  I did however leave with a few decent photographs.
END_OF_DOCUMENT_TOKEN_TO_BE_REPLACED

While my nephew was visiting Taiwan we took him to the National Museum of Marine Biology and Aquarium [國立海洋生物博物館] in Pingtung County near Kenting National Park.  The first time I visited the museum was four years ago when I had far fewer wrinkles around my eyes.  The museum is a blast and a must see for anyone visiting southern Taiwan.  I had a great time during both of my visits.

END_OF_DOCUMENT_TOKEN_TO_BE_REPLACED

Hengchun [恆春鎮] is Taiwan’s southernmost township and hosts the most completely preserved city gates in Taiwan.  This historic city is a great stop for anyone visiting southern Taiwan.

END_OF_DOCUMENT_TOKEN_TO_BE_REPLACED

While in Pingdong, we checked out an area of the coast during low tide.  We visited a lovely spot adjacent to Bitou Fishing Port [鼻頭漁港].  The small road leading to the fishing port is directly opposite the entrance for the Uni-Resort [統一墾丁] on HWY 26.

END_OF_DOCUMENT_TOKEN_TO_BE_REPLACED

Here are a few pictures from our recent trip south.  We were blessed during the trip with fabulous weather.  Although it was summer vacation for students, most of the places we went were largely free of crowds.  Perhaps most people were inside avoiding a suntan or busy going to full-day English summer camps like the unfortunate children who attend the school I work at.
END_OF_DOCUMENT_TOKEN_TO_BE_REPLACED

After we visited the Aquarium, long prior to the arrival of Typhoon Kaemi, we went to Kenting National Park which is the oldest and southernmost park in Taiwan. The northern section of the park has large mountains:
END_OF_DOCUMENT_TOKEN_TO_BE_REPLACED

We woke up bright and early on Sunday to drive from Nantou to Kenting. The drive was somewhere between 3 to 3.5 hours. Our first destination was the National Museum of Marine Biology and Aquarium. Despite the crowds, this museum was extremely impressive as a few Aquariums I have been to have had their fish displays stocked with fake corals, while this one had real corals in their displays. The first tank we visited was stocked with Damsels, Yellow Tangs, and a Clown Triggerfish who would not behave for photos:
END_OF_DOCUMENT_TOKEN_TO_BE_REPLACED